After nearly a year of talking about the games we’d like to make, my friends and I have finally gotten to committing time and making progress on our dream mobile game: a slow-paced, relaxing resource-management/cafe role-playing game. Neko Atsume meets Animal Crossing meets a super simple Diner Dash.

It’s interesting returning to a game design and UX design role outside of class and industry and addressing problems with only my peers, sans mentor. I’m finding I’m running into a lot of new problems that I’ve never come across during previous projects, though maybe that’s because I’ve learned enough to the point that I’m noticing details that I didn’t have the capacity to see previously. Vertical or horizontal scrolling on a phone? What happens to a text space when its not in use? How do we take care of edge cases for text length, like “vanilla-bean drizzle scone”? In that sense, noticing all of these details, I’m happy that I’ve grown.

But I’m also questioning how much time I should spend trying to find the best solution for a problem. At what point does the fun-level drop off? Can I afford to take time away from my other research work? Should I be treating this like a Game Jam or a potentially publishable product?

I’m sure if I took the time to, I could come up with ten different menu layouts to address how the user purchases a new cafe food. I could research and play ten different resource-management games and take notes on what works and and doesn’t work for navigation. I could have a professor tear the game design apart.

I guess what it boils down to is that two of us are starting school in August, and our one other team member is starting work next month as well. We’re in the last couple-week stretch, and we need to get snappy. Whatever awaits us at the end, I’m excited for it. 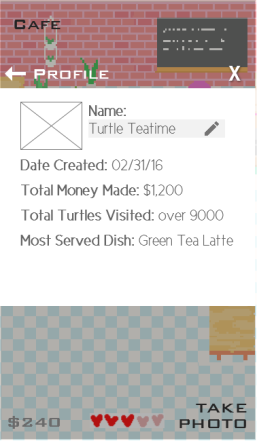 On a different note, I’m honestly really surprised our team hasn’t had a single major argument over any issue in our foray into indie game design. Even though we went into this project with one vision for the game (a fun, relaxing, eye-candy filled game with turtles), we haven’t reached an impasse on any design decision on how that vision would unfold. In my two other game projects, we’ve had many heated arguments from angel sprite design to whether there should be easy levels. And I’m sure my team members have had their fair share of tiffs.

Maybe it’s because we spend over three months on and off just discussing potential mechanics and cutting away at stuff we knew wouldn’t work and wouldn’t like (or maybe we’re secretly triplets separated from birth). This situation reminds me of the article A Sense of Where You Are; the writer talks about his trials and tribulations managing the timeline for developing products. He found most circular and pointless arguments could be avoided if the team spent more time in the Understand stage of the processing, ensuring that everyone is on board with fundamental objectives. This way, down the line, decisions on nitty gritty details could be made more quickly since everyone was facing it with the same mental model of the product.

Hopefully next time I want to do a project with friends, it will not stall as long as Turtle Time did, but I am glad we spent so much time figuring out what we all wanted out of the game, from mechanics to atmosphere. There is a lot of work ahead of us, but it will be worth seeing little pixel turtles slow walk their way to a bagel and coffee.

Song of the Day: Photograph – Her Film Soundtrack– Arcade Fire