I’m one of those people who’s guilty of only wearing a pair of boots twice because I saw and purchased a more stylish pair the following week. Sure, I could donate those boots to alleviate my guilt of being wasteful, what about when I do this again? Is there any way for me to not want to throw out my old clothes, for newer, shinier, better objects?

Jonathan Chapman provides an interesting alternative/addition to the paradigm for sustainable living of reduce, re-use, and recycle that is well-accepted today. Instead of trying to find solutions for the symptoms of human consumption, such as finding ways to deal with things people throw out, designers to should try to solve the root of the problem: human beings get tired of objects. 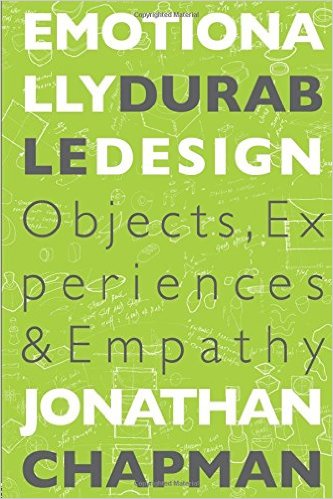 Chapman says people throw out stuff because it no longer reflects themselves as they grow and change: “Waste then is a symptom of expired empathy, a kind of failed relationship that leads to the dumping of one by the other.” Therefore, objects need to be designed to grow with a person (like a house plant) or retain some sort of indication of usage or memories with the user (like a teddy bear). Or it needs to appear to have sentience and dependability on the user (like a Tamagotchi) so the user feels responsibility or need to take care and use an object. As Bill Brown states in Thing Theory, “ we look through objects (to see what they disclose about history, society, nature, or culture-above all, what they disclose about us),” but “we begin to confront the thingness of objects when they stop working for us: when the drill breaks, when the car stalls, when the windows get filthy, when their flow within the circuits of production and distribution, consumption and exhibition, has been arrested, however momentarily.” Disobedience, unexpected feedback, and surprising interactivity has the potential to elevate an object’s meaning and presence in the user.

This was written in 2005, before smartphones and apps became as ubiquitous as it is today. The apps in the phone can change and be deleted and redownloaded at the whim of the user. There are hundreds of thousands of options for people to choose from to go with their changing needs and lifestyles. But people still throw out usable phones for newer versions when they come out every year. Though Chapman was talking about electronics in his book, maybe smartphones don’t apply as well, since he was talking about objects that are already designed to be physically durable (and iPhones are sort of well known for how easy they break and are planned to go obsolete).

Some of the work Chapman and his students have done include teacups which have engraved designs appear when tea has stained the cup, and Puma shoes which have designs appear when the material gets worn down. (My friend said it would be cool to have a graphic tee where it could be re-printed or the design could change whenever you want, while preserving the original tee. That would be pretty sweet.) The artist Walead Beshty has created works exploring how the meaning of objects is elevated through human interaction. His 2009 sculptures of Fedex boxes made out of copper collect memories of every person who has handled them, in the form of fingerprints and smudges on the patina.

Imbibing objects with memory and meaning, to transform it as the user grows as well, can be found in Kintsugi, a Japanese tradition meaning golden repair. Broken pottery is repaired with lacquer mixed with gold or other precious metals, and “Chances are, a vessel fixed by kintsugi will look more gorgeous, and more precious, than before it was fractured.” “Some contend that many Japanese have come to cherish the imperfection of a broken pot repaired in this way….seeing it as a creative addition and/or re-birth to the pot’s life story. Others say that when something has suffered damage and has a history, it becomes more beautiful.”

Emotionally durable design is a pretty interesting concept. We look for things to identify with all the time: people, movies, Shindan maker roulettes. Or we look for things that surprise us and question our perspective of the world. It’d be interesting to make objects that reflect people’s actions or inactions with them. With smaller and smaller electronics being made and accessibility to build with these things increasing, along with innovation in material design, interactivity within everyday objects can be something to look forward to in the future.

Song of the Day: All We Got (feat. Kanye West, Chicago Children’s Choir) – Chance the Rapper

Read of the Day: How to Write About Africa – Binyavanga Wainaina